Saturday 4 January 2020. Arrived yesterday evening and this morning I run into firefighter Robby from the UK. He is doing the same trip and we decided to explore Mexico City by hop-on-hop-off tour. In the historic city center, we walk around the main square, Zócalo. Still Christmas here. A big tree of red flowers and Christmas stuff on the facades. Catedral Metropolitana towers still suffer damage from the earthquake several years ago. Get on the bus and discover Basilica of our Lady de Guadalupe. The old Basilica is in front of a hill with a nice garden and next to it a huge new building and square for the celebrations. Museo Nacional de Antropologia is as well an impressive modern building. In the center, an artificial tree is rising on the square with a waterfall around. 23 big halls tell the story of the Maya, Aztec, and other people who lived in Mexico. Lots of artifacts, finds from the sites we still have to visit and some from sites I saw last year. Very cool. Meet the rest of the nice group later on.

The next day we have a city walk with our guide Ernesto. First the metro. All stations have symbols, because a lot of people still cannot read. Good system. At the underground station Zócalo we see the archaeological finds of an Aztec temple. The Aztecs build a huge city where the Spanish build Mexico City later on top. Of course they destroyed all the temples first. Used the stones for there colonial buildings. We walk through the city and visit the Palacio Nacional. Inside the wall paintings tell the history of Mexico. Some taco’s later we visit Palacio de Belles Artes with a white marble facade and colorful roof. Totally Art Deco outside and inside. Nice ornaments, lamps and roofs. Quite cool. At the fruit market a taste of all kinds of spices and fried grasshoppers.

Monday 6:59 h I wake up and have to hurry. At 7:05 h the minivan leaves. The site of Teotihuacán is huge. Still very cold, 5C , we start the tour with the guide. This site is very old and people lived here from 2000 BC till 750 AD. They still don’t know who lived here, but around 500 AD the city had a population of more than 100.000 people. They were trading with many cities till in Tikal. First the Templo del Quetzalcoatl (200 AD). The feathered serpent is the religious sign on the temple. We see the part with symbols of the temple underneath the temple. Then into the sun to warm up and walk over the Alley of the Dead to the Pyramid of the Sun. Climb the 65 m and enjoy the amazing view. Down on the steep stairs and walk along the palaces and the remains of the houses of rich people. A mural with a puma is the only big drawing still intact. Further on a new climb. The temple of the moon. Not as high but again a cool view. In the afternoon we take the bus to Puebla.

Puebla is a beautiful Unesco city. Lots of old houses. Some of the tiled facades are still intact. At the Santo Domingo church we visit the Rosario Chapel. The church is heavily decorated, but the chapel is overwhelming. Ornaments everywhere and of course layers of gold. Some nice paintings as well. Impressed we leave for more cool houses and the Catedral Basilica de Puebla. Inside again a lot of decorations. Beautiful huge wood carved doors, an alter that should be a copy of the one in Saint Peter’s in the Vatican. Organ and paintings are impressive as well. Poor people in those days… around 11 h the tour is finished and we’re on our own. See a demonstration in front of the city hall. That explains the heavily armed police and military this morning at the main square. Walk the tunnels to the fortress. Here the history of the 5 May victory against France is explained. The Biblioteca Palafoxiana is a cool hall with very old books and beautiful woodwork.

Thursday we’re in Ouxaca already. A local guide take us on a trip through the countryside. First stop is in El Tule. Here the oldest and biggest tree of Mexico is situated next to the church. Impressive 14 m wide trunk. Take a picture at some wings and back to the bus. Next stop is the archaeological site of Mitla. An Spanish church in the temple is a reminder of what the Spanish did in the past. More into the mountains is Hierve El Agua. We walk the path and enjoy the view at the petrified waterfalls. Limestone formations along the mountain. Quite cool. On top are some ponds and we go for a swim.

Friday Monte Alban, another site, is on my program. The site is on top of a mountain and the sun is burning. Besides this, the view is beautiful. More temples to explore. One of the buildings is an observatory. Nice decorations as well. After a few hours we walk back and at 13 the bus takes us down again to the city. We have lunch at Sazán Ouxaqueno. Beautiful lunch. Visit several churches and the monastery. Inside nice decorations and the history of town. At the bus station we get our tickets for 20:00 h, but the date is tomorrow. Change the tickets and leave at 21 h. Not too bad. The sleeping bus takes a winding road and it’s not easy to sleep.

Somehow all the civilizations in Mexico thought they were the center of the world. The first week is gone already, but Mexico has to offer a lot and maybe their belief was not that strange. 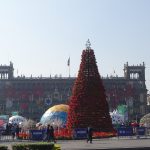 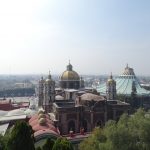 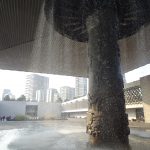 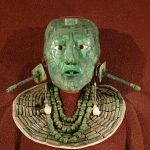 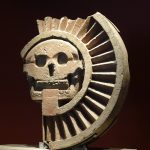 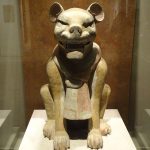 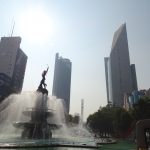 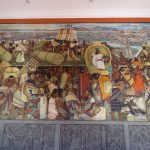 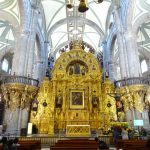 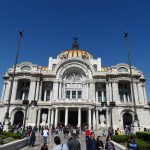 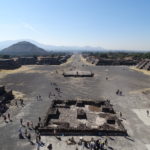 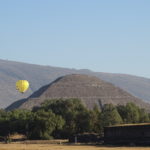 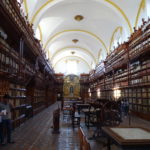 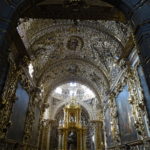 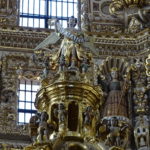 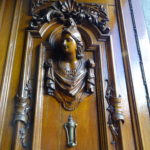 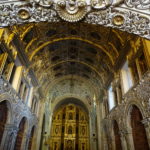 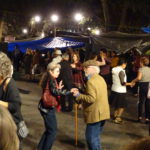 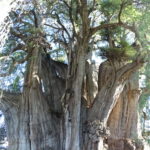 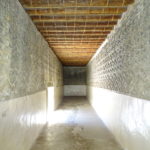 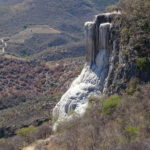 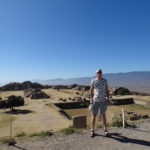 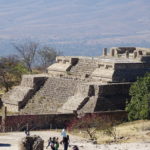 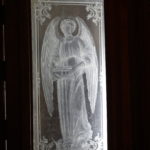 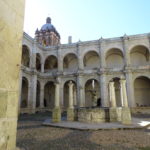 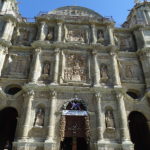