Tuesday 6 June. After a nice sleep and big breakfast with local dark bread. The trip is along the north coast and first stop is a cliff with seagulls and maybe some puffins. It’s stormy and around zero, so a quick photo will do. Ásbyrgi has an information center about how it is formed and which animals there live. Apparently this impressive gorge is formed just in a few hours by the force of nature a long time ago. Woow. We drive further into the gorge and walk the last part to the cliffs. It starts snowing. Icelandic summertime. The dirt road to Hafragilsfoss starts to become whiter and whiter. Halfway we’re driving in snow fields. The black road is in contrast with the snowy landscape. The falls are magical in the snow. It’s freezing cold, but we’re lucky to see this special surrounding. The north side of Dettifoss is next. With the snow it’s a beautiful cold picture. The car is black of dirt now and we’re wet. We’ve just warmed in the car when we arrive at Námaskard. A big field, yellow, brown and grey with steaming holes and boiling mud. The steam is smelly but nice of temperature. Before freezing we go further on the 1. Near the Myvatn nature baths a deep blue glowing lake with steaming sides. The water seems to illuminate. Then a lunch at the hot springs. Around lake Myvatn there are more attraction to visit and we do so. The caves of Grjótagjá are in the lava and contain hot blue water. Hverfjall is a gravel mountain with a big crater. Now it is snowing horizontal and it’s not very tempting to stay outside longer than necessary. Even in this amazing landscape. A field of old steam channels form a field of strange formed rocks at Dimmuborgir. At the lake side more strangely rocks and at Skútustadir series of pseudo-craters. We finish the round and go to the Viti crater with the blue lake and the geothermal power station. Our last stop of today. Back in Húsavik a nice diner in the local fish restaurant.

Wednesday 10 o’clock we’re on the road. The 845 down South. Half an hour later in the valley white water. The tourists are an indication where to go. The Godafoss second stage is already impressive, but the first stage is overwhelming. A huge amount of water drops down and it’s so clear. Today is 6°C, a bit warmer but still cold, wet and windy. Summer in Iceland. Akureyri is the “Capital of the sunny North”. We can use some sun, so we have to go there. The church, Akueyrarkirkja, is the main attraction in town. Not that impressive. The sun shows, but not for long. At Hrafna-Flóki the first Viking settler is remembered with a stone. The road is following the coastline in windy wet conditions. Several times we’re brave to leave the car for a moment. Freeze within a minute and then warm again slowly by the long drive. On the peninsula Vatness seal watching is possible at several spots. Hvitserkur is a strangely shaped rock in the sea and at the other side of the bay there are some seals on the black sandbank. You need a good zoom, but they’re there. At Svalbard the distance is shorter and a seal is relaxing on a rock in the sea. Apparently he is the only one who’s not cold. Diner at a coffeehouse in Hvammstangi and stay at Stadarflöt. It’s self-check in and sadly the pool table is gone. 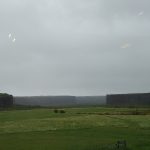 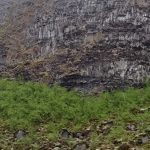 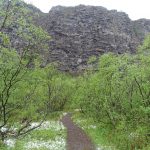 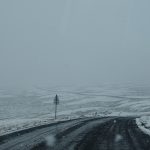 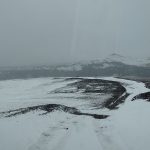 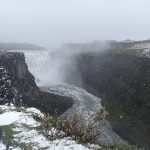 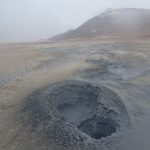 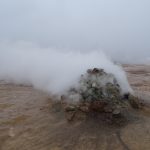 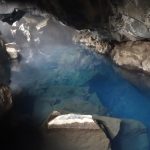 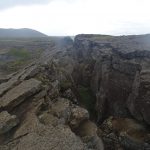 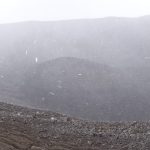 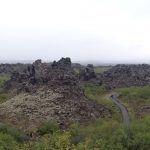 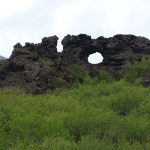 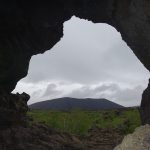 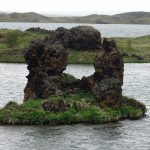 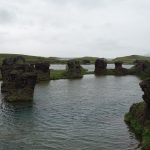 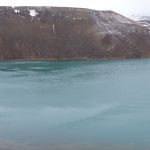 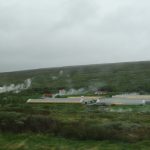 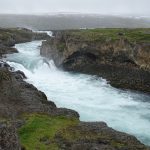 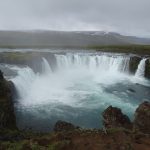 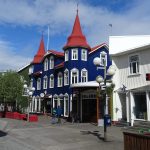 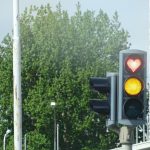 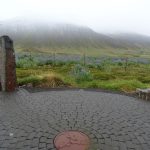 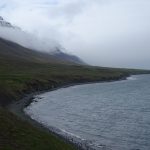 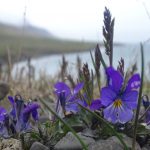 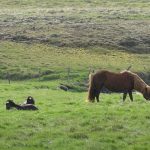 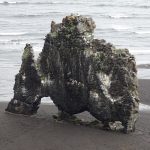 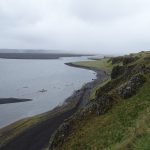 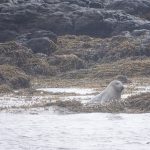